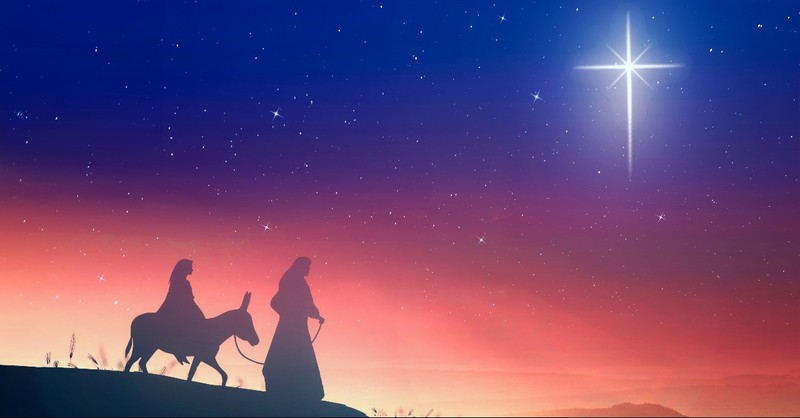 A Woman's Guide To The Universe
December 21, 2022December 21, 2022 gigi wolf 2 Comments Christmas, Gabriel, Mary and Joseph
Mary’s Christmas Story is by my good friend, David Williams, frequent contributor. He wrote a Christmas story last year, too. This might be a tradition! He has a great way of writing in contemporary dialogue.

“It is an honor to meet one as revered as you. I have been sent with great news.”  Golly, he was a big one. Imposing, one would say, frightening even. And he had seemingly popped out of nowhere, filling her doorway. Big, yes, but not very bright: this sort of meeting just wasn’t done, and the door was standing wide open for all to see.

“You are about to be pregnant.”

“As if.” As angels go, this one seemed uninformed. “Not possible. You got your messages crossed.”

“Just stop it. Right now. This is how rumors get started, and how weddings get canceled. And this is a very small town if you haven’t noticed, so I really can’t afford that. So like I said, I need to get back to …”

“This is not really about you. I came with a message, not an offer. You need to listen, and think it through.” Over his shoulder Mary saw Joseph carrying lumber into his shop. She shouldn’t be seen talking with a guy alone, not at this time. Not a hunk like this guy. “My fiance’ just walked across the square behind you, could have seen us talking, wouldn’t have been good for either of us. You’re telling me you’re a “messenger”, but didn’t know he was right there?”

“He was wearing the hat you just gave him. You got the wool from your cousin Elizabeth last year. You finished it a month ago. An early Christmas present.”

“And how did you know about …”

“He’s not fond of hats, by the way. You know, wool. Scratchy. But he wouldn’t show it. Speaking of Elizabeth, she’s pregnant, too.”

“Let me get this straight. You have been sent all the way from Yahweh to tell me my fiance’ doesn’t like his new hat and that my 60 year old cousin is pregnant.”

“And don’t forget that other thing: you’re right there with her.”

No one could know what he knew, so Mary figured she was either hallucinating or this guy was legit, if mistaken. Either way, no harm in seeing this through. She set down her laundry basket. “Okay, just for the sake of argument, there’s two reasons this can’t be true, so let’s make those clear so you can go find whoever it is you were supposed to talk to. One reason is about me, the other is about Yahweh.”

“Okay, first, I’m a virgin, which, if you are who you say you are, you already know. And you would know I intend on staying that way. Especially if he can’t be honest about his hat.”

“Fair point. But that gets us to whatever your second question is, because if I am from Yahweh you already know He can make this happen without Joseph if He wants to. So ask that one.”

“Fine. You just said the Lord is good.”

“If this happens, the you-know-what will hit the fan. I’ll be an adulteress in a very small town, dependent on condescendingly given charity. Joseph will be the betrayed laughing stock, unwilling to marry me because he’s innocent and unfit for anyone else because he’s presumed guilty. Honestly, that’s an embarrassingly bad plan, and you’re telling me a good Yahweh thought it up? I don’t think so.” “Because it would mess up your plans.”

“And that would make you unhappy.”

“Oh heavens, you don’t get it. My family has worked for generations to earn respect in this town, and I have followed that example. And so has Joseph and his family. And now the two of us are about to continue this legacy which, by the way, we have built since Moses’s stone tablets. That’s how life works, as you of all people know. So, yeah, what you’re saying doesn’t square with what we know. It would be horrible.”

“You are correct. This is not like the Yahweh you think you know. There are some things you don’t know, which I will explain. When you understand I will come back to your first question, about you.”

“Look, you’re still standing in my open doorway, and you can’t come inside. If people see me talking with …”

“Nobody can see us, I assure you.” Indeed, she hadn’t seen or heard anyone since Joseph walked by. “Have a seat, I have some things to say.”

“No, I want to hear this standing up.”

He had heard she was like that.  “Okay. Yahweh has decided that the time has come. The Messiah is coming, now. Your son is him. You will name him Jesus. You need to sit down yet?”

“I assume you are familiar with the prophets. You are already thinking that this could line up with them.”

“It is also occurring to you that Yahweh, coming in this fashion, would assure for himself the same fate you just described for yourself. A counter intuitive thing, that.” Gabriel grinned. “Well, it wont be quite that bad for you. I’ll talk with Joseph, so you guys will marry as planned. But yes, the stigma will be there for all three of you, and people will behave as you have said. Nothing to be done about that, people being people. But that is the first thing I want you to know about Yahweh. This world hurts Him as much as it does you. He lives it, too. But I’ll square it with Joseph.”

“That would help. I love him very much.” “And he loves you. So, remember this about Yahweh, also. He cannot, as a matter of character, do anything contrary to His love for you. He won’t get between you and Joseph. So far, this has been the easy part. The rest really is difficult.”

“The hat is worse than you’ve said?”

“Ha. You’ll need that humor. Go get a drink of water.”

Mary drank from a dipper by the urn, then offered some to Gabriel. He smiled. “Just testing”, she said, and returned to stand by her basket, a reminder for him to get on with it. She had things to do. “Okay, what else?”

“Your son will not live to see old age, and you will watch him die. It won’t be pleasant. I have come to tell you that Yahweh is as sacrificial as He is ruler, and you will grow into the understanding that your son, the Messiah, has come to sacrifice himself. You cannot understand this now.”

“Can anyone, especially a mother?”

“Yahweh has ordained that understanding can only grow as you know Him, that it cannot be gathered and grasped. When one takes a step as though what one knows about Yahweh is true, that amount of understanding follows, and with it, happiness. I have been sent to tell you that the Messiah will sacrifice himself in this world in order to be given the Throne of David in eternity. He is inviting you to do the same. Understanding will follow. That is the way life actually works, what the wise know your stone tablets say. You are the first to knowingly sacrifice all that you are to the known Messiah. If you do, others will join you. That is what I have been sent to tell you about Yahweh, that he loves you, that the time is now, and that you both will sacrifice your expectations of this world in order to live together eternally.”

“Put all that in one sentence.”

“You were afraid my news would cost you what you want most, and I am telling you that only this news can assure it. It is great news.”

“I am His servant. If this news is from Him, it is mine.”

Beyond her doorway, Mary saw the town square again filled with daily activity and people. She loved them all the more now, no longer beholden to fear of their disapproval, though now certain of it. She even felt a little sorry for them.

“You were right. I do understand a little more. But I wish I’d never thought of that stupid hat.” She realized she was talking to an empty space.

She would do as she had said. As soon as this laundry was done she would head over to Elizabeth’s place. That, she had to see, a pregnant retiree and a pregnant virgin in the same room. Let the fun begin.

Author’s note: The celebration of Christmas flows from two iconic scenes: Mary being told she is pregnant and, nine months later, the scene in Bethlehem. Mary and Joseph are rightfully portrayed as faithful, but I wonder if the scenes are a bit whitewashed. In Bethlehem, for instance, they had to have felt alone and afraid: they were four days journey from Nazareth, and there was a reason Mary, nine months along, walked that distance with Joseph. I described what that might have been in a previous story.

This year it occurred to me that Mary was chosen in part because she possessed that very characteristic, the ability to meet difficult situations head on. Isaiah tells us that Jesus was not winsome in appearance, so Mary was likely not beautiful.  She was an ordinary girl with extraordinary strength, I think, so when Gabriel arrived he might not have encountered an intimidated damsel. She would, I think, want to know what all this was about. But once she knew, and she knew that ultimately she would have to trust God with her future, she had the strength to make a decision of incredible faith. She is an example to me.

Rudolph the Red Nose Reindeer: A Sociological Dissemination
Should Criminals Have Their Own Country?
Lockdown Lingo: Giving It The Best That We Got
Please follow and like us: