A Woman's Guide To The Universe Love, Sex, Romance and All of That
September 27, 2017 gigi wolf 22 Comments short story

The Bridge of Love is a short story by Alfredo-Perozo.

She gazed over the fading twilight. The best part of the sky was overcome by grey clouds and it was clear they wouldn’t hold for long. Cold breeze was nipping at their exposed skin and both had goosebumps all over.

As Marianne looked over at the horizon, Jared stole glances at her soft features. Flushed cheeks, that he had always contemplated brushing his hand against. Just to feel them. Brown eyes that twinkle when they spot a four-leaf clover.  The gentle curve of her nose, and full lips. Mesmerizing, is what he thought.

Marianne felt his eyes on her. Her stomach lurched and her brain felt numb. Only in her wildest dreams had she ever thought of being and walking and breathing alongside him. Reality was surreal and blithe. Too good to be true. But here she was, and there he was. Only she knew how much courage she’d had to muster for this scene to not remain a fantasy. She had not asked him out, but had expressed a love of walking along the canal. He agreed to come with her. He’d said yes! Yes! He’d said yes! She tried to hide her smile.

A drop of rain hit her cheek and traveled down her neck.

She smiled and gave him a sidelong glance.

“How do you know that word?”

“Petrichor? I read your blog.”

He heaved a sigh and said, “Home is too far. We should get going.”

“Since the time you wrote ‘Love how feelings work. They augment and fade. And build up again.’ ”

He winked, a coy smile on his lips and pulled her toward their bikes.

“So you like it?” she asked, her desperation unmasked.

“It’s alright.”  Her expressions faltered, but she was quick to reply.

“I understand. It’s just that I have been-”

“Your writing is beautiful, Marianne. I was playing with you.”

She rolled her eyes and smiled.

“Not that it makes a difference if you like what I write, but thanks I guess,” she haughtily stated. To which Jared chuckled. She had always secretly wished that Jared would read her posts, but she never thought he would.

The wind blew again, this time colder and stronger than before. Marianne shivered, and that didn’t go unnoticed by Jared.

“You’re trembling with cold,” he insisted. He was a bit cold himself, but he couldn’t selfishly let her get cold  so that he could keep himself warm.

Indeed, she was trembling. And the helpfulness in his gesture, the kindness in his eyes and the candor in his smile were such, that it felt wrong to turn him down.

She rejoiced at the warm and cozy feeling she now had, in both her skin and her heart, thanks to the coat, and thanks to his arms surrounding her for a second.

A few more drops fell over them, as the clouds danced high over their heads, and the cold breeze played with the curls of Marianne’s hair. Jared wanted to reach out, to get a feel of them. She was perfect. She was just so perfect…

“We’d better hurry,” he said, as he reached for his bike. “It’ll soon start raining heavily.”

“So, shall we find shelter and wait until the rain stops?”

Jared pondered for a moment, and replied, “We can get home before the rain catches us, if we’re fast enough.” And looking at the rays of sunlight in the horizon, he added, “And we’re a bit late.”

They remained silent for a moment. Marianne then suddenly turned to Jared.

“You know what?” she said with a grin. Just as he frowned an inquiry, she jumped on her bike, raced forward, and yelled “Race you to the bridge!”

She had surprised herself. Marianne wasn’t competitive, deflected challenges, was indifferent to the thirst to win. But the evening was so right, exactly like the montages she watched with delight. Was it real? It tasted different because it was veridical, it was true. It tasted delectable, and made her want more.

She crouched, low and forward, cutting sharply through the strong headwind. Her nose burned with the biting cold, her eyes narrowed against the wind.

Jared didn’t take long to compose himself and was right behind her. He pedaled madly, unconcerned by the rocky path that he could have avoided had he taken the well-trodden, zig zagging road. He didn’t like her being beyond his reach. For him, it wasn’t a race with her, but to her. And that was victory.

She heard Jared call her name once, twice, thrice, but her response was no more than a mocking hand-wave. She giggled at the silliness of it all. He was hot on her heels and in no time they were beside each other, sporadically scaring one another with sudden swerves of their bikes.

The rain was no longer just a splatter of drizzles and was coming down fast enough to soak them. Still bantering, they approached the wooden bridge that spanned the gushing river, covered with weeds on either side. They slowed and rode onto the paved road toward home.

“I have something to show you,” Jared said.

Before she could protest further, he dismounted in one graceful motion and rested it against the balustrade. Marianne had no choice but to do the same and follow suit. She caught up and asked what was up. She was too invested in every passing moment she breathed the same air as Jared. She knew this would end and the end of this stealthy respite was horrifying. She didn’t care if it rained or stormed, all that made sense were these ticking moments.

Jared led her to the side of the bridge facing the moon. She looked over at him and followed the bead of water that emerged from his forehead, collated in his thick brow, trickled down the valley of his nose, shaping his pink lips and meeting the tip of his chin. He was magnificent to Marianne. 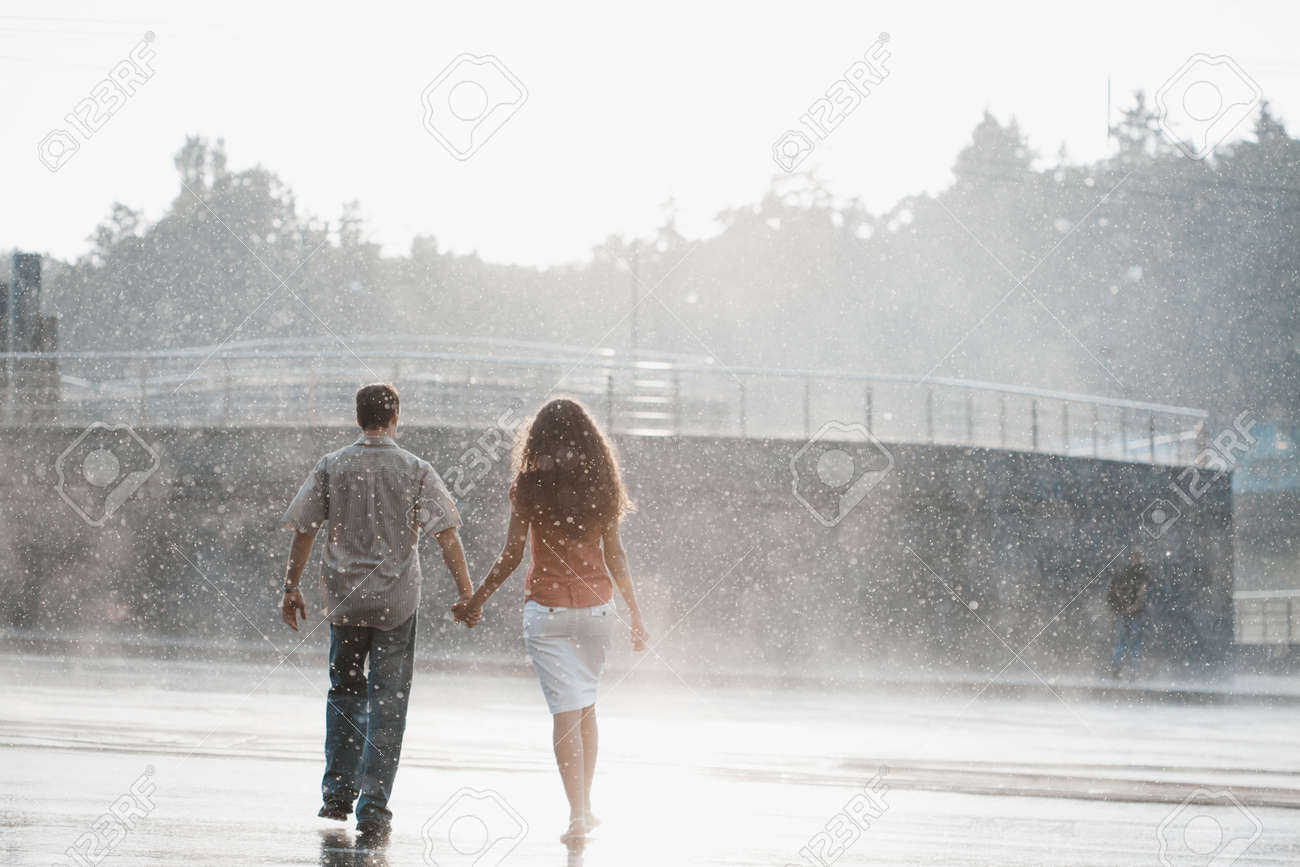 “Many years ago,” he began “Rumors of the collapse of this very bridge were widespread. A famous clairvoyant predicted it. He was known for the details of his prophecies, and precision in the smallest details. He said the bridge would dismantle, break into shreds. Why? When? He did not know. People feared this and offered to break it before it broke on its own, to which the clairvoyant reacted in a way that indicated there might be worse circumstances.”

After a pause, he continued, “They resorted to using boats. A few years later, the clairvoyant was on his deathbed, coughing up blood, overcome by illness. An acquaintance came to him and said, “‘The bridge prophecy was a lie, wasn’t it?'”

“The old man smiled and replied, “That took you a long time! I had a difficult time commuting from one end to the other for my basil leaves. Though rowing people across earned you some good money, I reckon?'”

“My father told me this story every night until I was eight, ” Jared said. “He’d made it up, but I would listen with rapt attention. I took pride in understanding the humor in it. I used to exaggerate my giggles to show I understood.”

He reached in his pocket and produced an object roughly the size of a fist.

“It’s turquoise. A healer stone. Dad gave it to me, two days before his death. Tomorrow is the anniversary of his death, in fact.”

Marianne’s eyes widened and she gasped. Like someone had punched her in the gut.

“It happened four years ago. He gave it to me and said, ” ‘The clairvoyant would have still lived if he’d had the stone.’ ” He gave a humorless chuckle. “The irony,”  he said with his jaw clenched, his forehead wrinkled in pain.

Jared put his head in his hands and sobbed quietly. Even in the rain, Marianne could separate tears from water. She had never seen Jared so sad, so desperate, so vulnerable.

She put her arm around his shoulders and wiped his tears away with her other hand. Jared cried a few moments longer and then sniffed. She desperately wanted to say something, to comfort him, but words failed her. She had a lump in her throat. She ran her hand through his hair and softly kissed his right cheek.

Jared lifted his head and looked up with her with both gratitude and disbelief. She had, once again, surprised herself. She felt alive.

“Marianne…” he began, in a low, solemn voice. “No one has ever been so kind to me before. I…” He stopped. They heard an ominous creaking. The bridge around them had begun to tremble. They stepped away from each other, and in shock watched as a large spindle on the opposite side crumbled into the canal,  water shooting high, a deafening sound rising when the rod hit the surface.

They were still frozen with shock as the dust settled, and the waters of the canal resumed its course. Drops of rain hit the water in sparkling diamonds. They were finally jolted out of shock at the sight of an old gentleman under an umbrella, watching them from a distance. They heard him say in tones of pride: “I told them. I told them!”

Marianne and Jared looked at the old man, at the broken bridge next to them, and then at each other.

They broke into hysterical laughter at the same moment.

Google Earth Has Made My Dog Famous. Famous!
In the Event of a Terrorist Attack, Please Pull Out Your Medical Files
Chasing A Black Cat Around La La Land
Please follow and like us:

Medication Warnings: Read Them At Your Peril 22 thoughts on “The Bridge Of Love”