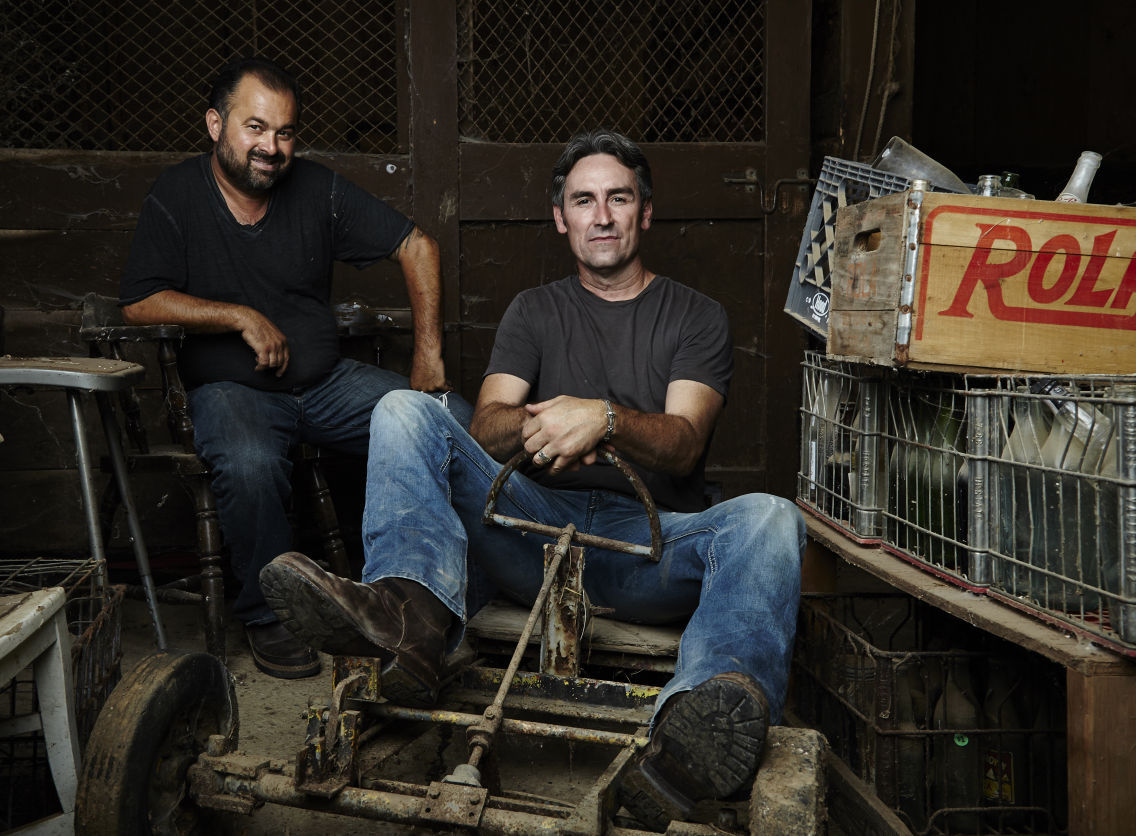 American Pickers is a snicker. Worse than that, they’re a total scam, just like all the other “reality shows.” I know I’m probably a dweeb, but I really thought the show had some semblance to reality.

I’ve been watching it for a few years now, and occasionally I’ll nag my hubby to take a road trip and bother people across America. We’d crash through gates posted with No Trespassing  signs to root through their junk and buy stuff that I could wash off and resell on Etsy or eBay.

Let’s annoy random people along the hyways and byways of this great country full of hoarders! Let’s take a chance of getting a shotgun stuck up our noses! Let’s brave fifteen vicious dogs, a few cranky geese, rusted iron scrap coated with lockjaw germs, old timber hiding deadly spiders, and roofs about to cave in!

C’mon! I’ve been wanting to buy a van just like this one to travel in , anyway!”

He always refused, but never said why. Then one day, when I was looking to see if I could buy an item the guys had ‘picked’ from someone’s hell hole of a house or outbuilding, I clicked on their store’s website.

Lo and behold, all I saw were t-shirts and coffee mugs that said Antique Archaeology!

AND, they have the nerve to call them vintage! A brand new t-shirt or mug is NOT vintage, Mike, just because you ordered it with the words Antique Archaeology on it from the printers. Fix it before there’s a class action lawsuit from a cranky retired lady. Well, that didn’t seem right, so I went in search of all the great things I had SEEN Mike and Frank loading into their cute white van with my very own eyes. On television.

Where were these things? Who had bought them? What did they sell for?

When I had trouble finding any of it, and told my hubby my suspicions that the show wasn’t telling us the whole truth about the Finding and Selling of Great Vintage Stuff, my hubby said, ‘Well, it’s a reality show. I knew that. ‘

Did he? Did he really? Then why didn’t he tell ME, instead of letting me be a dweeb for so long?

I started reading the posted reviews and forum threads about the show and the ‘cast’, written by people who’d visited the stores, that indeed, the only things for sale (almost) were the t-shirts and mugs.

So what happens to the stuff the “American Pickers” buy?’

I kept snooping and I read on another thread that the stuff is found, then ‘hidden’, months ahead of time by the show’s producers. Then one fine, sunny day Frank and Mike drive up to a house, and Glorioski, Batman!, find a property full of gems!

I had wondered why people were always at home when Frank and Mike knocked on the door. No one was ever in the bathroom, or out getting a haircut, or at the doctor’s for a colonoscopy. Please come back in one hour.

According to someone whose friend appeared on the show, the producers hid an item in a closet for Mike to ‘find’ in their house.

This is so adorable. I used to do stuff like that with my son. Like at Easter and Christmas, or just for fun, to motivate him to clean. I’d hide a cookie under his dirty clothes. This can backfire if a kid isn’t in the mood for a cookie and you forget which pile it’s hidden under.

The ants will find it before they do.

Afterwards, I guess the people have to carefully recreate the chaos they had before the guys ‘messed it up.’ But they had some cash in hand, a circumstance that’s always soothing to the spirit.

I STILL want to go on a road trip, but I’ll go a couple of months ahead of time and hide  stuff for us to ‘find!’ How fun will that be for my hubby?

The owners may not even notice.

I could sneak on their property late at night and start hiding their stuff in old buildings, or closets. Won’t they be surprised when they can’t find their percolator one morning, and then six months later see it sitting on the top shelf of the coat closet when they’re looking for their mittens? What a hoot!

I’m still bummed about American Pickers’ lack of ‘reality’, but I’ve made notes of where the people are that they’ve visited, and from whom they’ve bought junque. (That’s how you spell it when you think you can resell it.)

How can these hoarders object to selling the same thing twice to a different sucker when we show up in our cute white van?

Annoying Myself Silly With Self-Imposed Challenges
I Have Seen Washington, DC, And They Don't Want You To Park There. Ever.
To Do Lists Will So Do You
Please follow and like us:

Six Cool Insurance Policies I Wish I Had

2 thoughts on “American Pickers Is A Snicker”