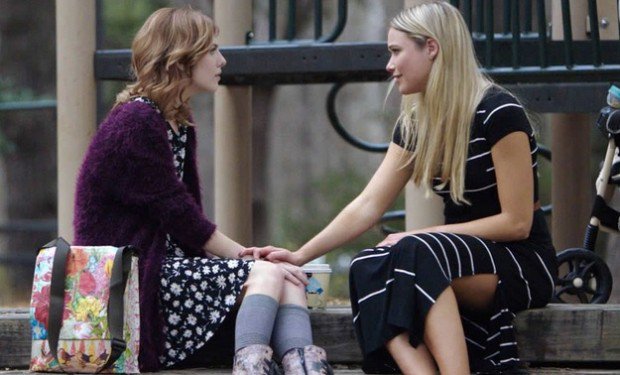 One day while reading the lineup of Lifetime movies scheduled that day in the TV guide, I became fascinated. I should have been gainfully employed doing something else, but life, and Lifetime Movie titles, sometimes interfere.

There was one movie titled,  I Killed My BFF.  Right away, this struck me as odd. Normally, people don’t give away the plot of a movie right there in the title.

I knew it was about two women, because no man I’ve ever met has said “BFF”. BFD, yes. After reading the title, which took me approximately a nano second, I knew I could safely go grocery shopping because: a) this murdering psycho is busy burying someone else and will leave me alone for the time being; and b) I know what’s going to happen in this movie and don’t really need to watch it.

Like, if she was really your BFF, why’d ya’ kill her? The concepts of ‘best friends’ and ‘murder’ appear to be mutually contradictory, but kids aren’t getting the parenting they need nowadays, and they don’t know from concepts.

The title should be My BFF Got In the Way Of My Plans, So I Offed Her And Now I Have No BFF.

Further along in the lineup on Lifetime are more movies with similar Lay It On The Line and Give It All Away titles.

There’s Deadly Adoption, a title that doesn’t make me wonder for a minute whether the movie might be about A Homicidal Prosecuting Attorney with a public defender BFF. A public defender so freaking beautiful she wins all her cases.

Losing all her cases to her BFF means the homicidal prosecuting attorney can’t afford her Manolos, which is why she became homicidal. We don’t need a psychologist to explain that one.

Female viewers would be hooked on the BFF movie, because not being able to buy $500 shoes means that murdering your public defender BFF is justifiable homicide. Only now, this stiletto-wearing perp won’t have a sympathetic PD to defend her.

This is known as Lifetime Movies irony.

I’m guessing Deadly Adoption is going to be about a mom who takes a lot of money for her unborn baby, and then kills the couple to get the baby back. Or, the baby grows up to be a whacko who kills her own BFF.

To keep a continuity of narrative going, Lifetime scheduled The Babysitter’s Black Book right after Deadly Adoption, because the adoptive couple, who may or may not survive getting this baby, will need a nubile young girl to watch it, one who keeps a suspicious black book which she hides from the IRS, a la Heidi Fleiss.

The biological mom of that adopted baby might even become the babysitter for her child, whom she will raise to be her very own BFF. How would this kid know otherwise?

As far as she or he is concerned, The Babysitter’s Black Book belongs to a neighbor lady who carries around a black address book with the numbers of other couples who will pay her lots of money for babies, real or fake. That alone should have tipped the kid off; everybody uses a Smartphone now.

To satisfy my curiosity, and to put things like grocery shopping off further, I looked up both the plots of these movies, and I was wrong about both of them, which means I need to put off the grocery shopping indefinitely.

There is more to Lifetime movies than I had originally suspected. There was no baby in the Deadly Adoption to begin with!

The plot of The Babysitter’s Black Book is about a group of high school girls who sleep with older men in order to earn money for college. In real life, girls want money for drugs and alcohol, a much more reasonable choice.

You don’t sleep with people just for cash. That always leads to trouble, because the government is going to want its share of your income. Besides which, you can get financial aid for school, but the government doesn’t have FAFSA for drugs and alcohol.

Just make sure men buy you the fifth of vodka and Vicodin first.

Not being smart about choices is why the girls in this Babysitter’s Black Book movie should just forget about college. I’ll bet girls from other countries have figured this out and are leaving our students in the dust.

The two movies following The Babysitter’s Black Book and Deadly Adoption are The Wrong Woman and The Kept Woman. Why didn’t this guy figure it out sooner? If she was the wrong one, why keep her? If he was keeping her, why was she the wrong one?

The clueless guy in these two Lifetime movies had shown The Incorrect Woman the door, then proceeded to meet The Younger Woman With The Great Rack, and The Woman Who Does A Fantastic Job Folding My Shirts.

They happen to be One And The Same Woman, lucky man.

As if having such a complex female around the house wasn’t enough, Lifetime paired this woman up with The Good Wife, who really must be one to put with The Cheating Husband’s shenanigans, because then he goes and gets The Good Mistress!

The Good Mistress is not the same person as The Kept Woman, who may have been The Wrong Woman. The Good Mistress, in reality, is The Invaluable Accountant, who keeps his books straight. This woman proves you can be immoral and smart, all at the same time.

And that’s where The Good Mistress, who got pregnant by The Big Jerk, became The Wrong Woman, and Killed Her BFF during the Deadly Adoption.

The only thing we need to know now is, which one did she kill, The Good Wife or The Fabulous Stylist? Please let everyone know before her hubbie’s big business meeting tonight.

To share this post with your friends, who will thank you for it, push one of those pretty buttons below-

The 8, 10, 18, or 25 Signs Of A Narcissist: If You're Talking About A Narcissist, You Must Be Talkin...
Should Criminals Have Their Own Country?
Phobias Do Not Scare Me. Unless I Have One. Do I? Is One Crawling Up My Back??
Please follow and like us:

3 thoughts on “Lifetime Movies Tell A Tale Of Whoa!”