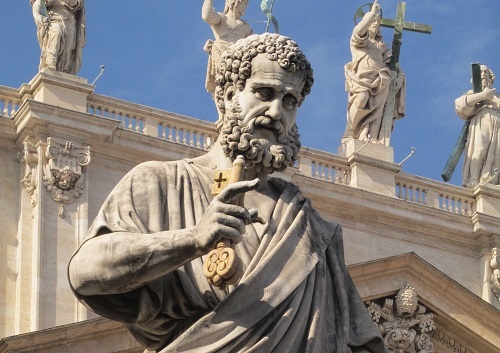 To speak with St Peter, please remain on the line. For an eternity.

Like everybody else, I think about what would happen if I had to speak with St Peter every time I call customer service for ANY company, anywhere. No? Is that just me?

Telephone menu hell is connected to Heaven, which sounds contradictory. Yesterday for instance, I saw a city vehicle blocking a handicapped ramp. I mean, blocking  it.  And get this, it was a 911 emergency Marshal’s car!

He was in the gym, or the bathroom, or something at the community pool center. In the time I waited in my truck to see if he’d come out, he never did. His lights weren’t flashing, and there were no other emergency vehicles, so he was just parked there for convenience.

I called code enforcement to report it, because I am parking rat fink. They sent me to parking enforcement, which sent me to a voice mail.  I tried to call the marshal’s office, which told me they were federal, and the guilty party was probably city. Okay, then.

Segueing gracefully, I have half full journals from different eras in my life. I’ll read them occasionally, and realize anew how much my life hasn’t changed. I still hate traffic, I’m still in love with the same guy (I’m just not obsessing about him because I’ve got him), and I’m still trying to lose weight. Where is the journal that says I’ve lost all the weight I want and look absolutely perfect?

I still have the same habits, with the exception of a few, that I vow to give up, or there are aspects of my shabby character that I’m determined to improve. For instance, I’d like to wake up in a better, more energized mood every day. I’m gonna need a bigger journal.

Maybe that’s why I eventually lose interest in keeping a journal.

I’m a natural ham, so I like to write as if there’s someone reading what I’m writing. A journal is supposed to be private. And someone is going to get hold of it one day, unless I burn it just before I die:

“Hey, wait! Don’t bury me yet! I’ve gotta burn some old journals! Yeah, they’re hidden under my underwear, and I wrote stuff about, cough, cough, you….”

My journals could have been written yesterday. I meet the same insane kinds of people; I hate snotty clerks, and I hate being kept on hold on almost every freaking phone call I ever make to any store or agency anywhere, after weaving my way for hours through a menu of phone choices that lead back….where?

To the main menu.

These customer service menus will one day lead us to the answers to the questions we have about the universe. Pay attention, because you’ll forget the choices you heard and will keep having to hang up and start over after you pressed the wrong button.

And you’ll eventually be on hold for Heaven, waiting to speak with St Peter and ask a few questions of the man. Like, will there be french fries and pizza after we get there, and can we eat them without gaining weight?

Just go to the FAQ section of Heaven.org to get the answers to many basic questions, and quit wasting his time and yours. Be prepared to resist temptation up there, because the walk to your Final Destination will be lined with boutiques and restaurants just like the ones you have to stroll by before you finally reach the rides in Disneyland. These stores carry overpriced wings, robes, rope sandals, harps, and snow globes with tiny replicas of the Pearly Gates.

(Save your money. You will have to carry these things for a LONG time.)

The mellifluous voice of an angel at the Heavenly Switchboard will tell you, while you’re clutching the phone, or driving with a Bluetooth hooked over your ear:

“Our menu choices have changed in the last five hundred years, so please listen carefully; If you committed many small sins but never murder, Press One. If you told your best friend that moving to Paris for that great new job at a fashion magazine and marrying that sexy, rich Frenchman who was madly in love with her, was a big mistake, Press Two.  If you want to be reincarnated, Press Three. If you’re a Baptist, Press Four. If you’re a Catholic, Press Five. If you lied on your income tax returns, but don’t think you’re a liar, because this is money you earned, dammit, and the government gave money away in the gazillions to everyone you hate, Press Six. If you think you are now in Hell and not really on hold for the Big Guy, Press 0 to be connected to an Operator.

And, if this is Gigi, and you took a pen and paper clips from the office now and then, even if you FULLY INTENDED to return them, please remain on the line. St. Peter wishes to speak with you personally.”

Eventually, you will be given a survey at the end of the call, to determine if heavenly customer service met all your needs:

“Were you satisfied, somewhat satisfied, very satisfied, but think service could be improved because you waited an eternity on hold? Was heavenly personnel helpful, somewhat helpful, very helpful, or devilishly incompetent? Were the facilities clean, but the graffiti was lacking in profanities?”

This survey will never end, and is known as the long, slow escalator to hell.