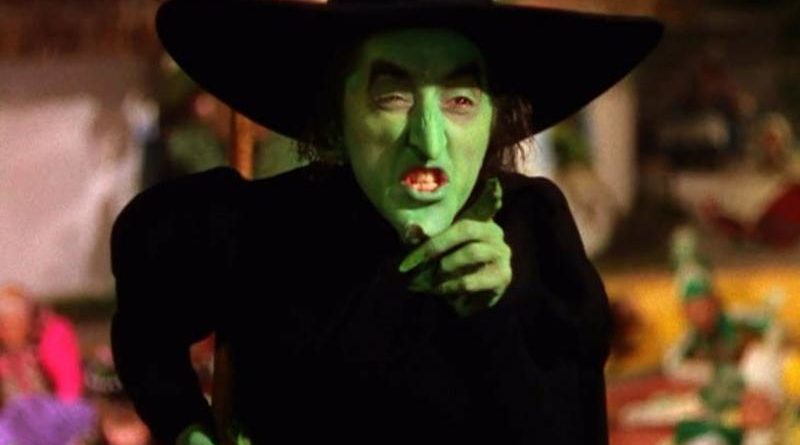 Wicked witches are just powerful women with great shoes. If you don’t believe me, let’s diagnose that most famous of wicked witches, the one from the West. West Hollywood, that is, Ms. Wicked Von West. Considering how the rest of the country demonizes Hollywood and its inhabitants, is it any surprise she’s from there?

The “Good” Witch of the North, my foot. When it’s cold, no one feels much like getting into trouble. Have you ever seen riots and protests during a rain or snowstorm? Nah. For one thing, molotav cocktails and such would fizzle out.

People imbued Glinda with goodness simply because she stayed warm and cozy inside. Big deal. I can do that. When skies are sunny on the other hand, such as in the West, people exhibit all sorts of hedonistic tendencies.

I’m not positive we need to “diagnose” Ms. Von Wicked. She seems like a fun party type who will need a ride home after a get together. I wouldn’t ask her to sit my dog, but as a neighbor, she’d come in handy for all kinds of things. Just having those winged monkeys is great security.

She deserves some sympathy. Growing older in the land of the nubile is never easy. Doing it with green skin would be a real downer. The monkeys represent every fresh young starlet come to Hollywood to make their fortune, and they’re willing to do almost anything that will get them in the paper, The Oz Register. Motto: All the Wicked News That’s Fit to Print.

Ms. Wicked had bought herself a hippie van to meet the monkeys at the bus station and offer them a ride to MGM (Monkey Go Mad) Studios. The next thing they knew, they were flying monkeys. Then they needed an agent, and who better than Ms. Wicked to be theirs? Once she got her hooks in them, she made them her slaves. Most of them never found other work.

(I think she went by other names, back in the day. Joan Crawford, Lana Turner, Bette Davis.)

She’d read in the trades that someone was wearing Silver Shoes. She became obsessed with getting her hands on them and her feet inside them. Why? What was so great about these shoes? Other than that some other woman had them and wouldn’t cop to where she’d bought them?

In the movie the shoes were ruby colored, but that was to show how wickedly feminine Ms. Wicked wanted to be. Red is the color of female sin: the Scarlet Woman and all that.

In the original story, Ms. Wicked’s sister was wearing the shoes when a house fell on her, or at least that’s the story Ms. W gave the police. Please. Who ever heard of a house falling on someone? You can get away with anything if your name is Lana Turner.

Dorothy took possession of the shoes by virtue of the Finders Keepers Defense, but her ownership was temporary; they fell off her feet on the ride home. But Dorothy was left with the carnal knowledge that a pair of killer shoes can give you the confidence to do almost anything, particularly when you need a ride home after getting stoned on hash with a Straw Man and tearing up the town with a bunch of Little People.

The Silver Shoes are a metaphor for power that’s just out of reach, especially for a woman with too many pets and no ethics. Only a portion of that power was revealed to the reader: the power to transport their wearer. The right shoes can take you many places. Try going there in flip flops.

Shoes. Silver shoes. Ruby shoes. Those Oz shoes represent not only power that women have been denied, but they also represent the essence of womanhood women supposedly give up by trying to get power.

Ms. Wicked didn’t recognize how much power she already had; she owned a gorgeous home in Beverly Hills and had lots of cheap help around the house. She inspired fear in her underlings and the willingness in wildlife to do her every bidding. I’d say she was doing something right.

Shoes, or the lack of the right ones, can put the kibosh on many a shenanigan. Ms. W focused on what she didn’t have, rather than on what she did have, and it proved to be her undoing.

Due to this grasping for shoes and power, Ms. W. West became the quintessential evil woman everyone likes to hate. She was the Hilary Clinton of Oz. Why do I say that?

“…..it is the Nome King who is the principal villain; the Wicked Witch of the West is rarely even referred to again after her death in the first book.”

See that? In the books, she disappears and the Nome King becomes the principal villain. Yet, who do we remember and talk about? No one will let her crimes and misdemeanors fade from the social landscape. They’re probably still calling for her to go to jail in Oz, even though she’s dead!

Ms. Wicked was aquaphobic, afraid of water. She didn’t even bleed, which meant that being a powerful witch (read: woman), she was bloodless and dried up; she had no heart, having sacrificed the Cult of Womanhood, which meant submissiveness.

Water, a religious symbol of cleansing and purity, would melt her. She couldn’t even die naturally and have the option of going to a spiritual plane. It’s like demons being sprinkled with holy water—it burns.

The Silver Shoes meant she could reclaim some of her lost femininity, lost (so the perception went) when she became a powerful woman. Her powers were even granted her by outside influences, not from her own efforts or personality. Her Golden Cap and the Silver Shoes gave her the powers she used and abused.

It’s important to note that she did abuse her powers. Same thing happened with Joan Crawford and Lana Turner.

What amazes me is that Mr. Baum knew all this long before Hollywood became the swinging town it was destined to be, so that I could come along later and find multiple metaphors in his story that suit my purposes. If I was still in school, I’d make this my doctoral thesis in Women’s Studies. Or Gender Studies. Or Monkey Shines, 101.

It’s no accident that Mr. Baum wrote his book smack dab in the middle of women’s suffrage, in 1900. Their fight was gaining momentum, and before long, in 1920, women won the right to vote. We know what happens when great societal change is coming, peeking over the horizon; people fantasize about its demise, and how better to do that than to destroy an “evil witch”?

The lesson here is, when you find a pair of shoes you like, buy two or more in your size.

Halloween And Trick Or Treating For Pot! Woo Hoo!
When Love Comes To Town: A Christmas Story
CyberBullying Is Alive And Well: The Wolf Bites Back With A New Book
Please follow and like us: