I took one of those free online IQ tests, and failed. I think someone challenged me to take it. Otherwise, I’d just as soon not know how many brain cells I’ve shed in my travels.

Unless getting a solid 100 points is a pretty good showing on an IQ test? I’m not sure. It would stand to reason that if I fail an IQ test, I wouldn’t know what makes a good score or why I failed it. I usually just blame these things on brain fog.

“What’s wrong with 68?”  I ask, and no one hears at all, not even the chair. Furniture is very close mouthed and hates small talk.

Today I learned about the Dunning-Kruger effect, which is a fancy way of saying someone is stupid. Remember that if anyone tries to snow you with their fancy vocabulary about your intelligence or lack of it.

Here is what it means:

In the field of psychology, the Dunning–Kruger effect is a cognitive bias, wherein persons of low ability suffer from illusory superiority when they mistakenly assess their cognitive ability as greater than it is. The cognitive bias of illusory superiority derives from the metacognitive inability of low-ability persons to recognize their own ineptitude. Without the self-awareness of metacognition, low-ability people cannot objectively evaluate their actual competence or incompetence.

It means we’re too stupid to know how stupid we are. There are upsides to everything people, and being kept in ignorance about your own ignorance is a bright side.

So when people make fun of you for pretending to know organic chemistry, or because you said you know how to shoot hoops professionally, and you embarrassed yourself at the last office party, yell at them, “I’m carrying a Dunning Kruger, and I’m not afraid to use it!”

They’ll think you’re packing heat and are quite prepared to defend your lack of intelligence with violence.

I like starting online IQ tests, but within five minutes I’m jonesing for a drink. Maybe I should drink while testing. I might do much better. Mostly, I get bored answering those questions that have all these figures in little boxes: 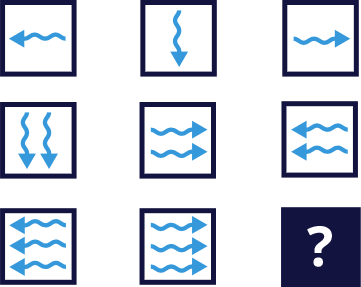 These little boxes make me feel like I’m already drunk, and furthermore, they make me have to go to the bathroom. They’re like foreign road signs telling you to get the hell out of there and to watch out for tsunamis.

Besides packing your Dunning-Kruger when you take an IQ test, you have to worry about something called dysrationalia. Before you decide you know what this is, you Dunning-Krugerite, let me explain. Dysrationalia is a logical thought defect, otherwise known as, “For a smart person, you sure are stupid.”

I’ve known a lot of these. They’re different from your basic DK (Dunning-Kruger) person. These people test high in IQ tests (like I probably would if I wasn’t so arrogant about them), but they lack common sense. Like Sheldon in The Big Bang Theory.

They’re the ones who will buy fifteen containers of sunblock in Alaska, because it’s on sale.

I fit easily and happily into the first description. I take the easy way out in solving problems, because that’s the rational way to solve problems. Why would you look for difficulty? Obviously, other Arrogant Buffoons think otherwise about problem solving. They’re the ones who’ll survive a zombie apocalypse. (Arrogant Buffoons would be an awesome name for a rock group.)

I also fit well in the second part, which wouldn’t be true if I didn’t have that darn Dunning-Kruger thing.

As far as I’m concerned, the results would be the same either way if you’re attempting to give me a perm and are not qualified in any way:

More than 80 percent of people choose C.  The correct answer is A.

Here is how to think it through logically:

Anne is the only person whose marital status is unknown. You need to consider both possibilities, either married or unmarried, to determine whether you have enough information to draw a conclusion.

This thought process is called fully disjunctive reasoning—reasoning that considers all possibilities.

The fact that the problem does not reveal whether Anne is or is not married suggests to people that they do not have enough information, and they make the easiest inference (C) without thinking through all the possibilities.

What I’d like to know is why these three people, Jack, Anne, and George, sound like a bad soap opera.

All three are standing around looking at each other. Probably in a living room. Two are married, or maybe they’re unmarried. Anne is most likely single, even though the solution says she’s married. She knows Jack, that perve, is married, but he’s trying to hit on her. Anne wants George, but now she can’t trust him because of her bad experience with Jack. Who knows who George is looking at, or who he secretly wants, or which bathroom he’ll want to use. We’ve got enough to deal with here.

How can these people think I take the easy way out in solving problems? I’ve thought of more possibilities than they ever could for these three characters who are looking for love in all the wrong places.

Dude, Your Mom Is Stoned: Marijuana Is Now Respectable, The Neighbors Said So
Australia and Me: The Dingo Was My Baby
10 Warning Signs Of A Psychopath And A Serial Killer: Could This Be You?
Please follow and like us:

16 thoughts on “Online IQ Tests: How To Fail One Intelligently”