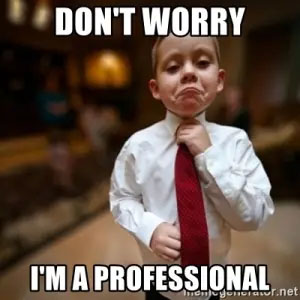 Professionalism is dead, I hear. I didn’t actually “hear” that, I have read it in comments and posts on the internet, that bastion of all that’s Good and True. It was also there on the internet where I read that saying “Thank you” is lame. If you want or expect a thank you for a gift or a favor, you’re as bad as Hitler.

That Hitler. He gets around. Everybody’s favorite funny guy.

The most recent comment on professionalism was on Twitter the other day. Some buzz kill thought that a cat walking across the room, or screen, or wherever office denizens meet, was unprofessional conduct on the part of the cat.

Actually, the comment was castigating the person who owned the cat, not the cat. From what I’ve heard, cats have one outfit and they wear it all day, every day. No talking to them about professionalism.

Everyone jumped on this Twit from Twitter and their unreasonable attitude. A few of them stated that “No one under 40 cares about professionalism.” One guy said that the cat was a nice distraction from the “Mind numbing misery and boredom of work and the state of the world.” I kid you not; he said “state of the world.”

This tech guy sitting in his mom’s windowless basement was not going to get away with such doom and gloom pronouncements. No sirree. I jumped into my Superhero Mom cape and Go Go boots and let him have it.

First I told him to eat his broccoli. Then I told him he should care about professionalism. How would he like to sit in economy class (no one who can afford first class talks like this), crane his neck and see his United pilot walk on the plane wearing flip flops, shorts, an old wrinkled tee shirt, sit down in the cockpit, and start flipping switches? “Goooood morning, Ladies and Gents, I’m Captain Millennial and I’ll be your captain today. I’m 26, unmarried, never have sex and don’t expect to ever have it, and we’ll be flying over…..I dunno….the Grand Canyon, maybe? Lemme check with the tower. If they’re back from one of those 30 minute breaks they’re always taking.”

Right about then, the captain’s cat strolls down the walkway, goes into the cockpit, leaps up on the instrument panel and walks across the dials and switches before plopping down to sleep. Now they’ll be headed for Cleveland because no one wants to disturb the cat.

Or the basement guy’s surgeon. Our techie is in his doc’s office after getting a physical because his mom told him to. His doc has his feet up on the desk, and he’s wearing an old sweatshirt that says, Drink Responsibly Means Don’t Spill It, and he tells Our Basement Techie that “The news is bad, dude. Very bad.”

And then of course, the doc’s cat strolls across his desk. Just to keep it entertaining. At least the cat is wearing a white coat. It’s very cute the way the doc stops talking to his patient so he can pet and talk to his cat. “Who’s my puddy tat? Hmm? Who?”

Hey, it’s a distraction from that very bad news, right?

I didn’t stop my lecture there. I told him to “Get a better job, for cripe’s sake,” thus aligning myself with the girl who couldn’t understand homelessness. “Why don’t they just buy a house?” she inquires.

Anyone “under 40” who puts up with a “mind numbing job” when there are so many opportunities out there is a dweeb, a lost cause. Try finding a job in the 70s without a college degree, no internet, limited funds, and no clue on how to mow a lawn. And your peers made fun of you for “working for The Man.”

Had I really been his mom I would have lambasted him with more eye rolling pronouncements and even a Mom compliment or two, but Twitter limits characters. They have not limited this character, though.

Superhero Mom Fixes the State of the World

He cannot claim that he only meant people like himself under 40, either. You either include everyone in your oh so grand pronouncements about what we “don’t care about”, or you are a biased, bigoted, exclusionary individual.

Naturally, this interlude wasn’t the end of the subject. My mind kept conjuring images of various occupations and whether professional attire and conduct can indeed, be chucked out the window.

I suspect professionalism has been relegated to the all encompassing category of White Supremacy and Why We Don’t Like It Anymore.

Professionalism, along with a host of other “virtues” we expect in our White Supremacist professionals, has joined “niceness, punctuality, and perfectionism” on the dung heap of society. These virtues are all being discouraged and eliminated in our progressive schools, as some other Word on the Street tells me. It’s part of the new Diversity, Inclusion, and Other Stupid Stuff.

Trust me, nothing sounds quite as stupid as when school personnel says it.

What I’d like to know is, does this mean everyone can show up for work when they want? What happened to On Time Departures for our tee shirt wearing Captain Millennial? What about your scheduled surgery? How about attorneys and such like? Will judges allow sweats and scruffy Nikes on the court room floor? Can your cat be there, too? A cat can look at a murderer and still disdain them. We need cats in court.

Why would you care how your attorney dresses during your murder trial, anyway? Isn’t it enough he knows the law and can get you off on an insanity defense? PJs are fine. Leave the guy alone.

Don’t be such a stick in the mud about this stuff, you white supremacist.

How about the school where these things are being taught? How does a lack of “niceness” tie in with their anti-bullying campaigns? Do we hafta be on time for math class? Does this mean I can just NOT show up for school? After all, the principal is home in bed with some teacher, after which he plays golf. It’s all good. See you when we see you.

So much richness here to make fun of, I hardly know where to end this post. I didn’t even mention soldiers and how the military might feel about professionalism and what they’ll do if under 40s ignore it. Who you gonna shoot anyway, without some hint (like a professional uniform) to tell you who the bad guys are? Don’t shoot the cat, for cripe’s sake. He’s lying on the tank getting warm.

But like a professional writer who sits in a dark basement without pants on, I will end this post on a professional note. Which means I edited it, more than once even, and did not assault your eyes with poor grammar, formatting, run on sentences, or a lack of punctuation.

I’m a white supremacist. I freely admit that now. How To Be A Mean Girl In Five Easy Steps
Leo And Mike Two Renaissance Guys, Get Quorphaned
Boobies, Babies, And Boeings: I Don't Like To Fly With Your Kids
Please follow and like us:

Of Diapers And Depends: 5 Reasons To Be An Older Mom

6 thoughts on “Word On The Street: Professionalism Is Dead”