The Cosmopolitan Hotel and Casino (I don’t know if that’s its full name; Vegas people might consider the word “casino” declasse now), was the scene for that time of year for me to meet up with my BFF for a staycation in Las Vegas.

The last time she and her boyfriend were here for his convention was four years ago and before that, seven years ago. Is this the third time this decade? I dunno; I’ll let someone else do the math. Math is not my idea of a staycation.

They got here very late on Thursday due to the grounding of the Boeing plane. I met up with her at 1 pm on Friday. From that time on, the playing began!

Friday morning, I decided to rent a mobility scooter for Saturday, Sunday, and Monday. I was so sore from using my rollator Friday afternoon, I almost decided to end it all then and there. The hotels and casinos are big enough to qualify as small towns. You could live in one indefinitely without ever going outside and people walk more there than they do in real life.

Each evening, I waited outside the lobby for the MOTH to pick me up and thus saved a small fortune by me not driving and parking. Parking is no longer free in Vegas, unless you find someone’s house to park in front of and if they’re smart, they’ll charge you, too. One of Vegas’ best perks is gone forever and so is any number of valets’ hefty incomes.

It took the MOTH thirty minutes to an hour to get there since it was the weekend of St. Patty’s Day. There’s no better place to people watch. I made friends with the doormen and the valets who double as traffic cops. The Cosmo arrival area is marble floored and the air is relatively clean. There’s a funnel through there that sweeps out the exhaust.

Three lanes of traffic move through there in a steady stream. The MOTH would pull up in the second lane and I would tootle over to the car in the scooter, where he’d take it and tootle it back to the bell desk where it would stay until the next morning.

On Sunday, after he dropped me off at the bell desk and then left with my rollator, a security guard on a bike pulled up next to him at the car. He told him that the lane he was in was for “pick up and drop off only.”

“That’s what I was doing,” the MOTH replied.

“This is for pick up and drop off only,” the insecurity guard responded.

“That’s what I was doing,” the MOTH snapped back. “I dropped my wife at the bell desk where her mobility scooter is and brought back her rollator and I’m leaving.”

He got in the car and the insecurity guard asked him if he was just “going to get in his car and drive away while he was talking to him?”

“What do you want from me?” the MOTH demanded.

“This lane is for pick up and drop off only!”

“That’s what I was doing!” the MOTH said. “You need to think first when you talk to people.”

“YOU need to think first,” the insecurity guard mimicked in a seventh grade voice.

The MOTH laughed and got in his car and drove off, still laughing. I told him the guard had seen a local and a working guy, and figured he was a likely target for intimidation with no consequences.

“Well, he was wrong,” the MOTH said. “I could have given him a little push and six cars would bump over him before anyone knew it.”

I said, “He’ll lie there, gasping, and his last words will be, ‘This lane is for…cough, cough…pick up…and….gasp….drop…off…onl…..’ And clunk goes his head.” 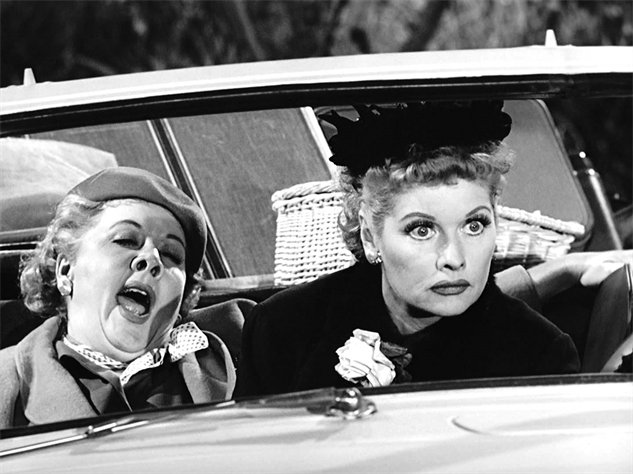 This is for pick up and drop off ONLY?

The rental office for the scooter asked me if I wanted damage insurance. It only goes 15mph or so, and I didn’t expect to drive it on the freeway, so I turned down the insurance.

That turned out to be a bad idea.

For three days I bumped into walls and got stuck in elevators and on door jambs as I tried to maneuver the scooter back and forth and out of narrow hallways, and around tables and chairs and people.

Nothing is made for handicapped people. Probably not even the building that houses The Institute for the Advancement of Handicapped People.

I drove it around and around my friend as we waited for elevators, and bumped it into the padded walls where I had to sit facing the wall like a drooling idiot in order to back straight out once we landed on the floor we wanted.

They should have offered me life insurance.

I told people we were Lucy and Ethel in order to garner a little sympathy, but most guests at the Cosmopolitan are under 12 and have never seen I Love Lucy. 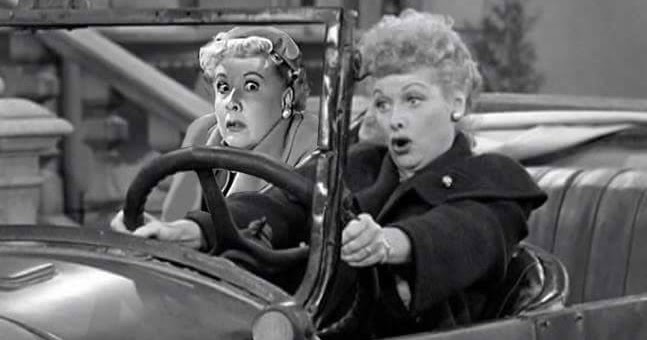 Where are the brakes on this thing?

We spotted my friend’s sister in-law sitting at a slot machine. She didn’t recognize me, which made driving the mobility scooter at her at full speed yelling, “Here I come!” all the more fun. She was positive I was going to swerve at the last second.

The pool and the hot tub were on the to-do list for the second day. A sun umbrella would have been nice, but you are only allowed one if you can prove you are in the upper one percent of society and thus must protect your skin. The only seats that had umbrellas (and were empty of guests), were the sheikh type beds with three foot deep mattresses. These are a mere $300 to $400 to rent for the afternoon.

I’d be taking that puppy home if I paid that much for it. And I had the mobility scooter to carry it out of the place.

Lunch was served to us on our little pool top balcony (in the shade of a building), and then I went to the hot tub downstairs via one of those elevators. There was a lifeguard who stood nearby who must have been there only for me.

I got to yell at some very small guests who jumped into the hot tub with swim fins after tromping on my towel and my phone that was nearby in case I needed to call for help.

There were plenty of young men in the hot tub, leaning back and drinking their drinks, but I had no hope they might move and pull me up by the hair should I sink or fall. The lifeguard was a good idea. Although, to be fair, everyone was extremely nice and helpful to me since I’m an OWL.

We need a massage and a Jacuzzi, ASAP. And a visit to a “serenity rain cave” with a Kalahari Tangerine Fig Butter hydrator.

We ate spicy Pok Pok chicken in the District (this is a fancy name for a food court), after which I unwittingly bought a $12 bottle of water, which undoubtedly had unicorn spit in it. Why else would water be so expensive?

My friend was introduced to a special face cream in a soap store. The salesclerk informed her that it cost $599 for a quarter of an ounce, though the familiar ingredients did not list Elvis Presley sperm. We were further informed that the cream was totally worth it and would make us look ten years old.

The halls leading to The District  were filled with huge portraits of long gone celebrities who played Vegas. One of them was a picture of Marilyn Maxwell, who, my mother told me now and then, held my older brother when he was a baby.

On Monday, after two days of adventures, we went to the hammam, commonly known as the spa.

The brochure for the “Sahra and Hammam” (the spa) tells us interested visitors that the Sahra “mimics the desert.” It has “sandstone walls with veins of silver” (taken straight from people’s pockets), and that the Sahra will “create a path to balance, clarity, and calm.”

If it did this for me, it disappeared today while vacuuming and cleaning the filthy house.

The two of us donned our cozy spa robes, had a cold glass of water with cucumber in it, and then we “sank into the Space Between, a serenity lounge where falling waters are heard and absolute calm settles in a dramatic soul-soaring atmosphere.”

Our souls soared while we waited for our masseuses and I ate a banana. I grabbed my soul where it hovered near the ceiling of the “monsoon serenity cave” and then tootled off behind my masseuse for my Moroccan journey into balance and clarity.

They ask guests at reception if they prefer a male or a female massage therapist, or whether they are gender-biased when it comes to masseuses. I told them I prefer mine with no genitals at all, and since they live to serve, I think I ruined a young life.

Wanna make a hot tub out of this thing?

After our massages, we jumped into the Jacuzzi with jets so strong, I couldn’t sit in one place. I crept up the marble stairs and then down some other marble stairs into the water until I figured out how to maneuver my way across the ledge.

There was a slight disagreement as to whether the scooter could go where I wanted to go and whether it should get wet. I figure people drive them in the rain, so they must be waterproof.

Getting out of the steam room was an adventure because I couldn’t see whether I was squashing another guest in the “serenity monsoon cave” who was basking their soaring soul on a “giant stone slab heated from within as if by an eternal sun.”

Maybe they wouldn’t notice mundane things like their toes being run over by a two hundred pound mobility scooter. The “motherstone” would heal them right up.

I bid goodbye on Monday to the many varied guests wearing almost nothing, to those wearing things I couldn’t identify as clothing. I bid goodbye to my new best friends, the doorman and the valets.

Marie Kondo And Stripper Pole Vacuuming
How I Felt After The Election: For The Love of God, Believe Tom Robinson!
The Robinhood App And A New Addiction For Me: I'm A Bloated Plutocrat